Our Beloved Family:
I was recently a guest on the Dr. Oz podcast speaking about mental clarity and the role it plays in health. During the conversation, I mentioned how a life saturated in media technology can easily keep the mind so overly stimulated that there’s no room left to make space where clarity can occur. This is happening to all of us to some extent, but we don’t notice it because digital technology is ubiquitous to the 21st century lifestyle where chronic hyper-stimulation has become the norm.

When we stay in a hyper-stimulated mode for long periods of time, we live our lives in a mild state of fight-or-flight where cortisol levels remain elevated. Unfortunately, this has health consequences down the road because elevated cortisol has been implicated in hundreds of health problems. In fact, overdosing on technology, which is very easy to do, not only poses risks to physical health, but decreases the quality of relationships, and even alters the way we think, learn, and remember.

You might want to think about how you could benefit from digitally downsizing your life in one or two ways.

So to create more mental clarity in my life (and for all the other obvious reasons), I’m digitally downsizing my life. While I can’t get rid of technology completely, I’m taking steps to de-emphasize its prominence in my life and reducing my temptation to use it mindlessly. When I got off all social media, I received frantic phone calls from friends wondering if something terrible had happened to me. On the contrary, it’s all good. I’ve gotten rid of my smartphone and gone back to a flip phone. Yes, they still make them. Not having internet access on my phone eliminates the temptation to check email, visit Twitter, watch videos, and surf the web when I need to be engaged with the world and people around me. I’ve also gone back to using a pager so that I use my phone to return only the most important calls.

So, I’m living like it’s 1999 again. I don’t mean to imply that it’s easy; it’s not, but I’ve committed a full year to what I call my media detox sabbatical. It should be a very interesting experiment. I’ll be sure to let you know the changes I experience as a result of it. In the meantime, you might want to think about how you could benefit from digitally downsizing your life in one or two ways. Don’t worry. You don’t have to get a flip phone.

Light, Love, & Clarity in the Month Ahead,
Dr. Habib Sadeghi 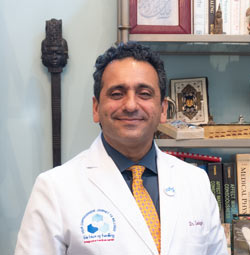 Meditation Minute with Lord Byron
Send this to a friend