The inventor and his invaluable contributions to imaging and medical microscopy

I’ve shared much over the years about frequency, vibration and manifestation. Science has known for quite some time that all things vibrate at their own personal frequency. Certain emotions sustained over time can change our vibrational frequency and manifest in illness.

Recently I read an article that explained how current research is using resonant frequency to destroy cancer cells. As exciting as that prospect is, it’s not a new approach. What surprised me most about the article was that it didn’t mention one of the greatest but long forgotten scientists of the 20th century, who many believe cured cancer by the same method 83 years ago. 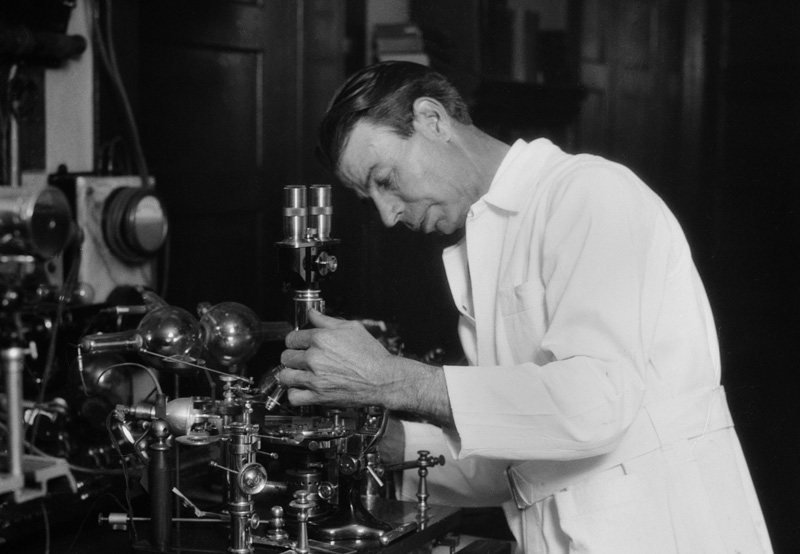 Royal Raymond Rife made an invaluable contribution to medical microscopes.

As a scientist, inventor, and engineer, particularly in imaging and medical microscopy, Royal Raymond Rife was a genius. He was to medical optics what Nikola Tesla was to physics. In 1913, industrial tycoon Henry Timken of the Timken Roller Bearing Company in Canton, Ohio, sought Rife’s help to solve a manufacturing problem. The solution was a scanning machine that could evaluate the quality of the steel used in the company’s roller bearings before going into production. The scanner improved the quality of the company’s products and streamlined production to such a degree that Timken was overjoyed. When he learned that Rife’s passion was medical imaging, Timken gave him his full financial support and set him up at the family’s estate in San Diego to create his personal lab. No expense was too great and nothing was held back.

Rife’s previous work had led him to believe that microorganisms (bacteria, viruses, and parasites) were at the root of all disease. To prove his theory, he had to see these pathogens in their live state during his experiments, some of which were so small, particularly viruses, that no imaging equipment existed that could come close to viewing them. That wasn’t a stumbling block to Rife. As a mechanical engineer and microscopy expert, he built a microscope that could magnify 60,000 times, and the superior magnification was equaled by its resolution. The microorganisms Rife was viewing were so infinitesimally small that the atoms in the chemical stain normally used to expose microorganisms would have obscured them. Instead Rife’s microscope used monochromatic light that caused the organism to fluoresce. Rife could identify the virus he was observing by the color it refracted.

Years later in 1944, both the Journal of the Franklin Institute for Scientific and Mechanical Arts and The Smithsonian featured the Rife Universal Microscope alongside the newly created electron microscope in articles on emerging technology in optics. In The Smithsonian article entitled “The New Microscopes,” three micrographs from the Rife Universal Microscope were printed. The resolution of those images was unmatched by any existing technology, including the electron microscope. In fact they’re still unmatched even by today’s technology. What’s more, those images were taken ten years prior by Rife in 1934.

Rife discovered that a simple electromagnetic wave wasn’t enough to destroy a microorganism. Instead he found a radio frequency wave was readily accepted by the body if it was emitted by a gas within a glass tube.

The other astounding feature of the Rife Universal Microscope was that viruses could be viewed in their live state, like a movie, whereas the electron microscope could only view viruses in still images, or like photos. When studying any organism, observing how it moves and behaves in real time provides much more valuable information than viewing it as a static image.

Over the course of 20 years, Rife would build five of his microscopes, some requested by the most prestigious research scientists in the world. The Rife Universal Microscope created a paradigm shift in pathology and microbiology research because much of what his device could do is still considered impossible today. But the biggest change was yet to come.

Knowing everything vibrated at its own frequency, Rife believed that if he could discover the vibrational frequencies at which disease-causing microorganisms vibrated, then he could bombard them with that frequency until they shook so hard they exploded, the same way an opera singer matches the frequency of a wine glass with her voice and shatters it.

Rife discovered that a simple electromagnetic wave wasn’t enough to destroy a microorganism. Instead he found a radio frequency wave was readily accepted by the body if it was emitted by a gas within a glass tube. This allowed the frequency wave to penetrate deeply into the body with scalpel-like precision. Because the wave was precisely tuned to the frequency of the microorganism, only the pathogen was affected, leaving the surrounding tissue unharmed.

It’s exciting and enraging to think that cancer, along with many other diseases, was cured 83 years ago, and yet half a million people die from malignancies every year.

By now Rife’s accomplishments were attracting a lot of attention from the press and he was working with the most respected medical experts of the day. These included Dr. E. C. Rosenow, bacteriologist and head of the pathology department at the Mayo Clinic, Dr. Arthur Kendall, bacteriologist at Northwestern University, Dr. Milbank Johnson of the University of Southern California (USC) and head of the Medical Society of California, Lee De Forrest, technology scientist, and William D. Coolidge, physicist.

Unfortunately Rife was also attracting a lot of negative press, mainly from the medical establishment and Harvard University. To prove his detractors wrong, he along with Dr. Rosenow invited several of Rife’s most prestigious but severest critics to a demonstration where he destroyed the poliomyelitis virus with its MOR in 1932, twenty years before the vaccine was invented and thirty years before it became available to the public.

Hidden beneath his critics’ astonishment at what they’d seen was panic. They knew Rife’s microscope and beam-ray technology would mean the loss of billions of dollars to hospitals, pharmaceutical companies, and research institutes, not to mention the overnight elimination of entire fields of medical science and research, as well as the discrediting of thousands of careers of the most highly respected university and medical center physicians, scientists and administrators. Just days after the demonstration, Dr. Rosenow was fired from his position at the Mayo Clinic, and the fix was in to bury Rife’s research.

Uneasy about Dr. Rosenow’s fate and what might be brewing for him behind the scenes, Rife pressed on. He knew a microorganism was at the root of cancer and was determined to find it. That same year, he discovered a virus in a breast tumor that he called the BX virus. Even more, he found the BX virus to be pleomorphic, meaning that it changed form based on its terrain. He discovered its MOR and was able to destroy it.

Never having used his beam ray on a living creature, Rife introduced the BX virus into rats. Sure enough, they developed huge tumors. Using his beam ray to expose the tumors to their MOR, Rife was able to completely heal the rats. Seeing these incredible results, Dr. Johnson from USC insisted that it was time to try the beam ray on human patients. Rife was apprehensive, but insisted that if they were to have human trials, a research committee comprised of physicians at the top of the most prestigious medical associations had to be part of the proceedings. Dr. Johnson agreed and pulled a committee together that even included Dr. Alvin Ford, President of the American Association of Pathologists, a member Rife specifically requested.

The trials included 16 terminally ill patients with various cancers and were conducted at the Ella Scripps mansion and estate in La Jolla, CA in 1934. In just 70 days, the committee declared the first 14 patients cured of their cancer. The remaining two were declared cured three weeks later. Incredibly, the patients only required two 3-minute sessions per week to achieve total recovery. Rife found that more-frequent sessions didn’t allow the lymphatic system enough time to take up the released toxins from the destroyed virus and remove them from the body.

Later that year, a black tie banquet was held to honor Rife and “Celebrate the End of All Disease.” Less than 15 years later, however, none of the people at that dinner would even admit to knowing Rife, who would be left in poverty with his career ruined. His five microscopes would be confiscated along with the majority of his records and the two known beam-ray machines in existence. Today scientists are still struggling to recreate Rife’s technology from the remnants of what wasn’t destroyed of his writings.

It’s exciting and enraging to think that cancer, along with many other diseases, was cured 83 years ago, and yet half a million people die from malignancies every year. As an institution mired in politics and money, the medical establishment seems to be the worst at killing its prophets and saints. Hopefully this new generation of courageous scientists will be able to put together the pieces from an unsung genius and recreate the “end of all disease” in his memory.

To get the full story on Royal Raymond Rife and his incredible discoveries, I recommend the Royal Rife Documentary on YouTube. It contains original audio recordings of Rife and his supporting physicians that shed fascinating light on his work and what was happening at the time. You’ll see film footage of the beam ray in action as it destroys microorganisms with frequency waves. You’ll also find out how Rife’s downfall was orchestrated and what’s being done now to recreate his work. If you’re a reader, check out the book The Cancer Cure That Worked, by Barry Lynes.