What’s on Your Phone?

Our Beloved Family:
One of the simplest and most powerful health prevention actions we can take is to wash our hands regularly. Growing up, we were all reminded to wash our hands before dinnertime, but how many of us complied then, and how many of us do it consistently today? As obvious as washing hands is to staying healthy, it wasn’t always that way. In 1847, Hungarian physician, Ignaz Semmelweis, suspected that unseen elements might be responsible for the deaths of hundreds of pregnant women each year from what was known as puerperal fever. He felt that if doctors washed their hands between delivering babies, the death rate of mothers would drop dramatically. After much resistance, doctors accepted the handwashing protocol and the deaths of birthing mothers immediately plummeted. Years later, after Semmelweis’ death, Louis Pasteur discovered the existence of germs.

Everything we touch imparts a portion of its molecules to us, and we to it. A study published in the Proceedings of the National Academy of Sciences found that we transfer many of our skin molecules to our cell phones as we interact with them. In fact, molecules from whatever else we’ve touched before touching the phone also get transferred to it. By simply taking a swab from a person’s cell phone, researchers were able to construct what they called a “molecular signature” from which they could derive a fairly accurate profile of the phone’s owner, including personal care products used, preferred foods, medical conditions, and even personal habits.

Molecules harvested from cell phones included those from beauty and personal care products, food, pesticides and insecticides, plasticizers, medications like anti-depressants and antifungals, and more. Researchers could even determine levels of skin inflammation from the samples taken. Traces from elements the phone owner touched only once could still be found on the phone up to six months later, such as DEET, an ingredient in mosquito repellent. In fact, the molecular profiles taken from cell phones were so specific, that researchers could pair people up with their phones simply by taking a skin sample from their hands. 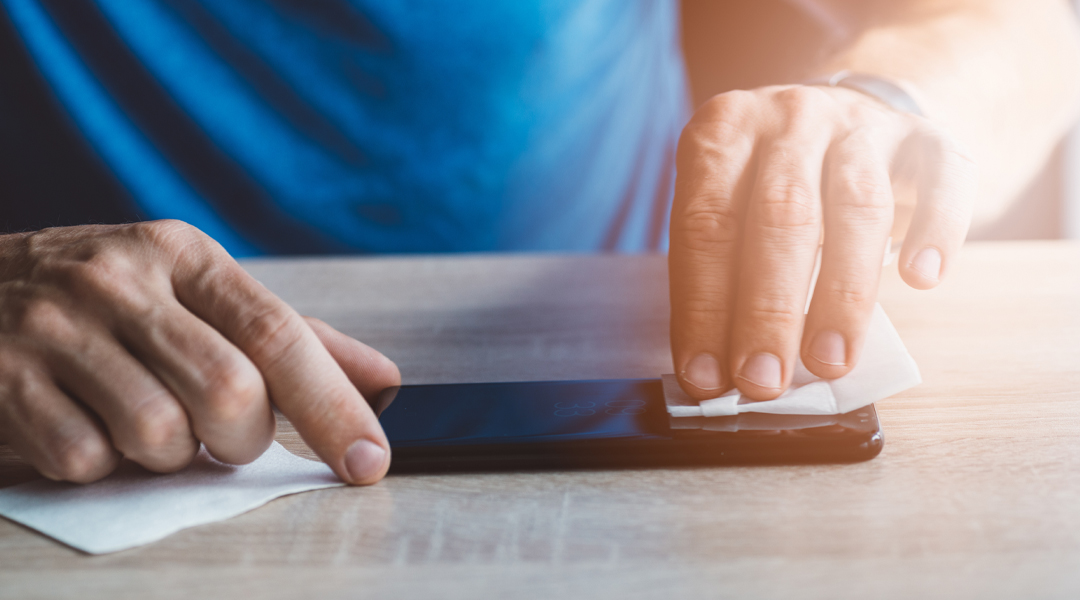 Although this kind of research may eventually be used to construct composite sketches of personal lifestyle for law enforcement, it has a more immediate message for us; almost none of us are washing our hands enough, if at all. We didn’t even talk about germs, which research from the London School of Hygiene has found 92% of cell phones to be contaminated with bacteria, including E. coli, a bacteria of fecal origin.

It should be clear now that we need to make it a habit to wash our hands regularly, particularly after using the restroom (yes, some need reminded about this!), before eating and when coming home from any public place where we’ve shaken lots of people’s hands or touched anything lots of other people touch like department store door handles, gas pumps, checkout credit card machines, and so on.

It won’t do you much good if you use your clean hands to touch a dirty cell phone. Do your best to clean your phone daily. You can purchase sanitizing phone wipes in bulk online, as well as screen cleaning kits with a microfiber cloth and diluted alcohol solution to disinfect the phone. You might also want to consider using a Q-tip dabbed with a little rubbing alcohol to make sure crevices have been covered like ports and the grating of the speaker grill.

Love, Light, and Clarity in the Month Ahead,
Dr. Habib Sadeghi and Dr. Sherry Sami

Learn how you can protect yourself this cold season.

Meditation Minute with John Lockwood Huie
Send this to a friend